When we receive an interior design project, it is very important to keep in mind the surface it has in order to create a functional design that reflects the owner's personality at the same time. So, for this house in Branesti we chose an eclectic interior design, where beige shades and other elements such as mirrors or scoop lights predominate, precisely to create spatial illusion. 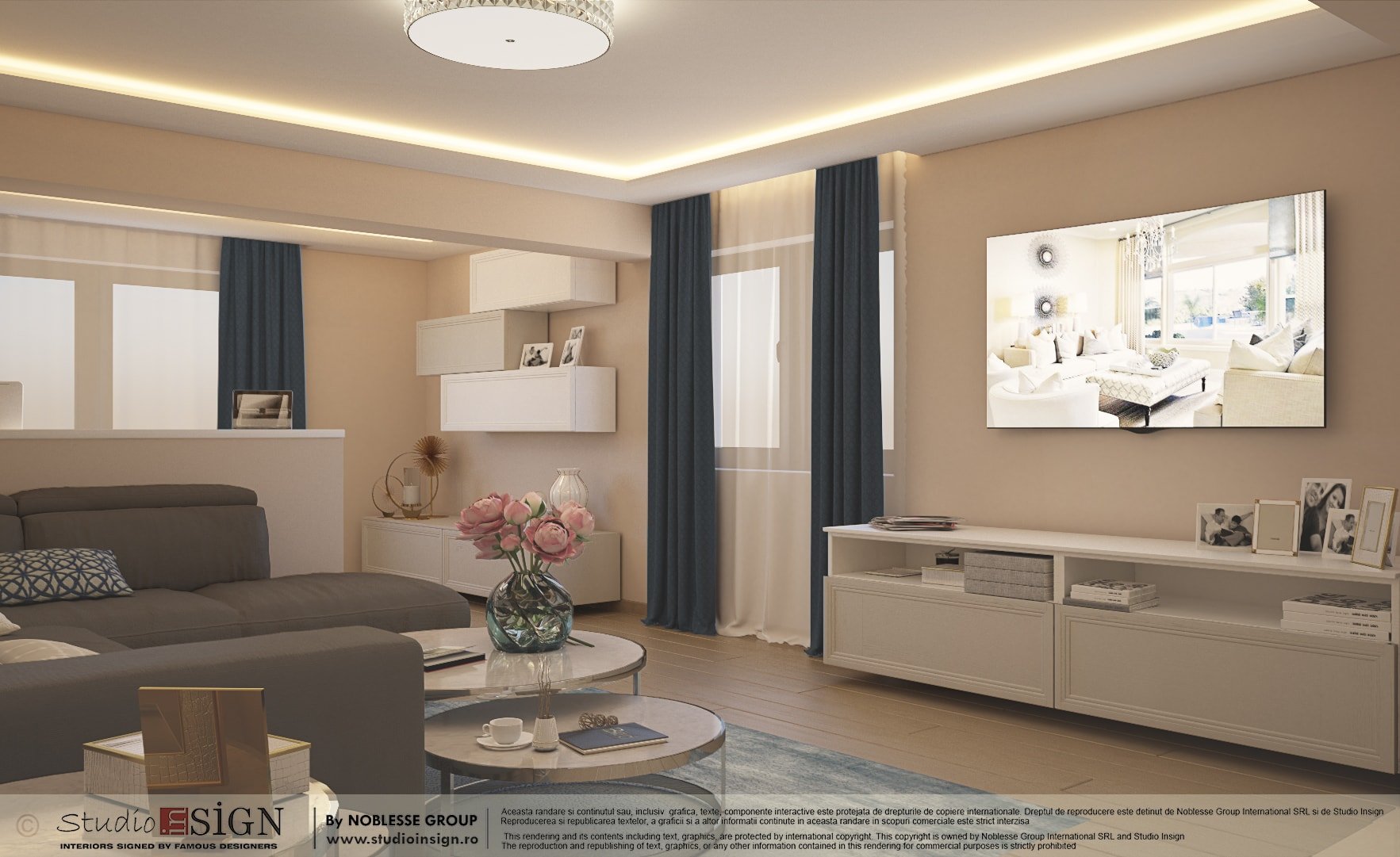 In the living room we used cream tones and blue accents of color. To create a feeling of spatiality and stretching we used scoop lights on the ceiling and on the walls. 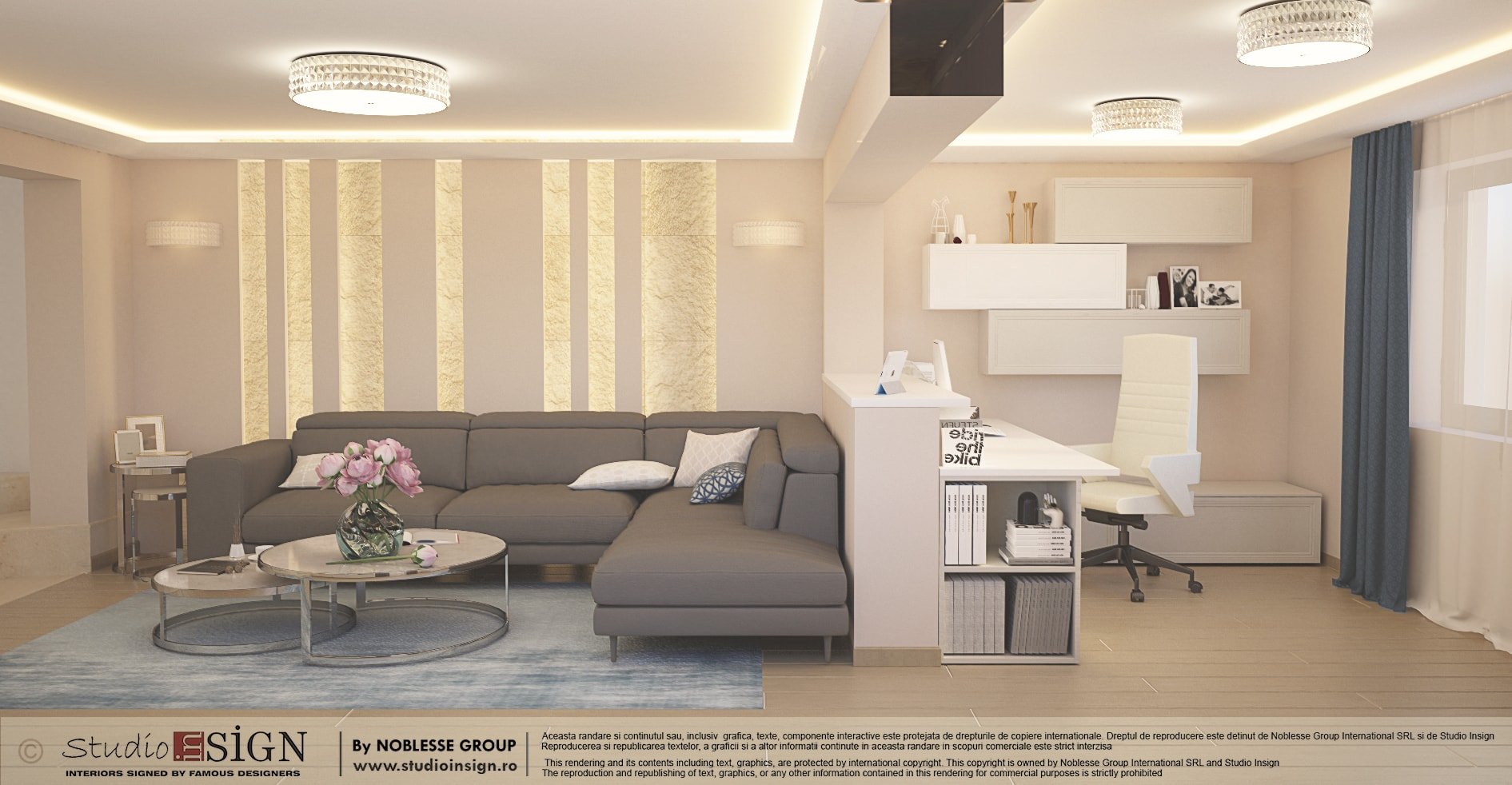 The white-furnished office is located in the open space living room, these two spaces being bounded by a existing parapet. 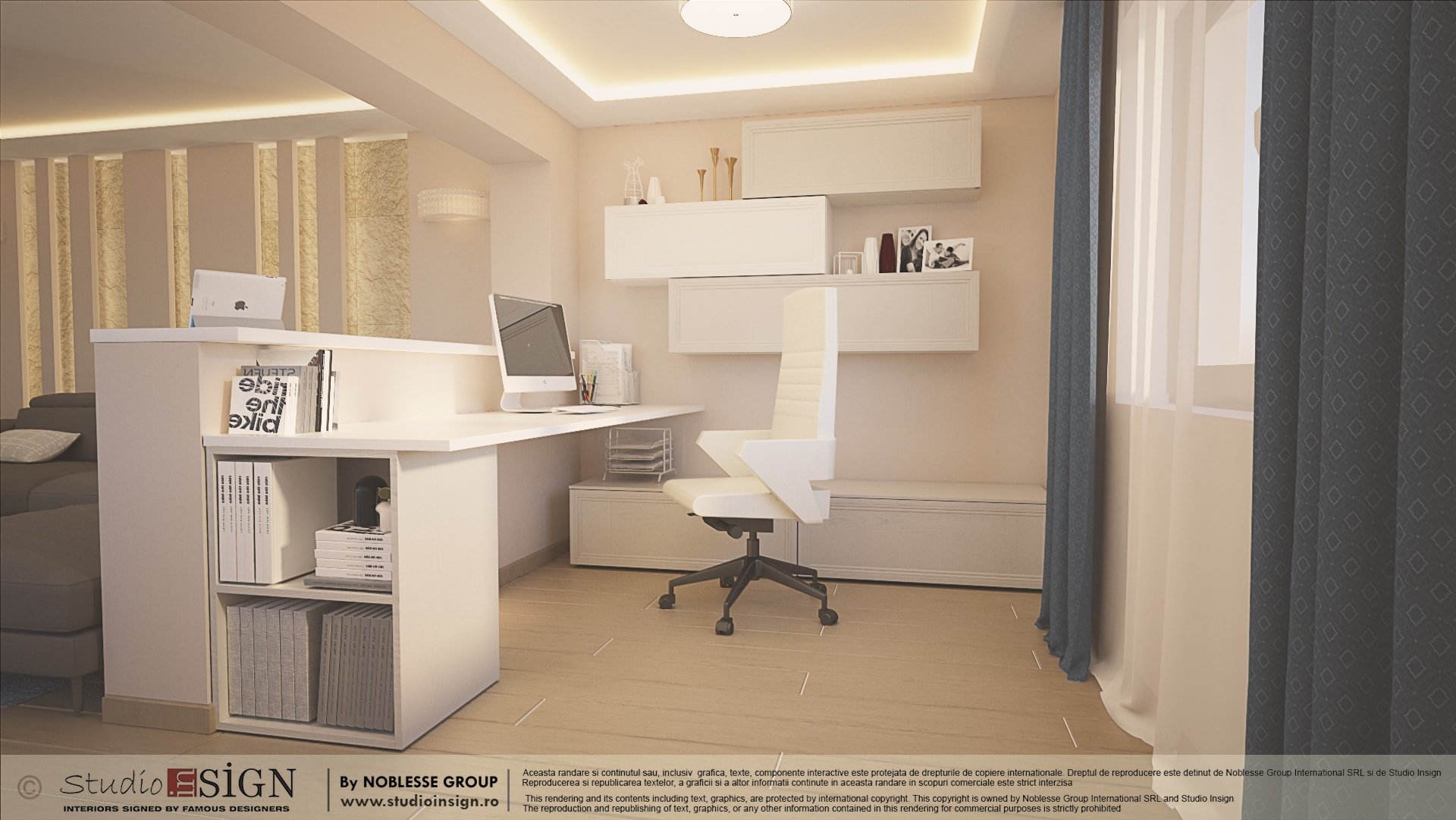 In the downstairs lobby, the hangers feature dual functionality, as they can also be used as a mirror. These mirrors have the role of creating the feeling of space and brightness.

In the ground floor bathroom we chose decorative ceramics in tones of cream. We also wanted this space to convey the feeling of height and space, so we used spotlights on the ceiling. To create an elegant setting, we hid the washing machine, the ironing board and the laundry basket behind the furniture doors and integrated the sink into the countertop. The shower has a built-in steamer. 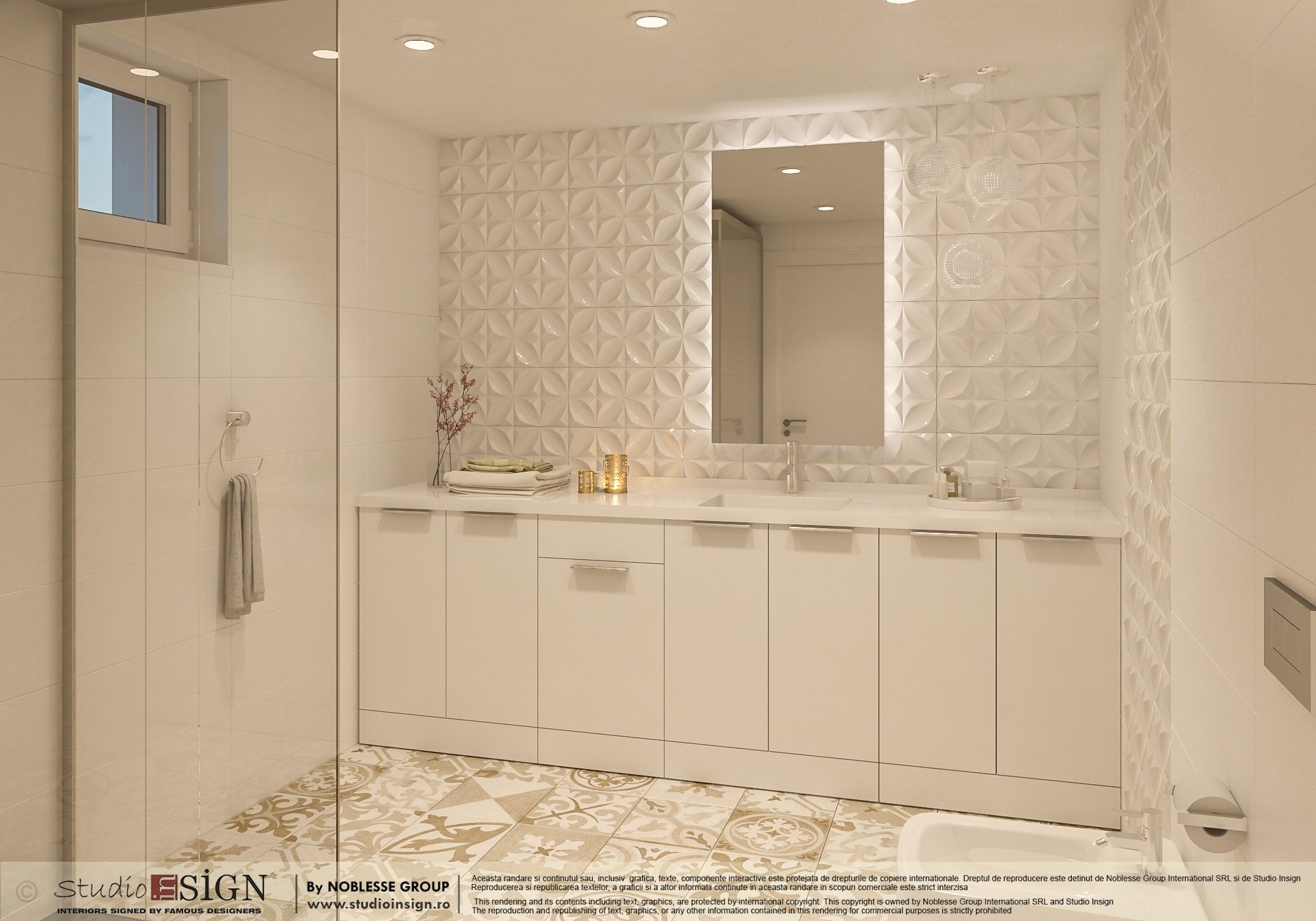 The master bedroom is designed in an eclectic style, in tones of cream. We chose a high-quality furniture, made of solid wood and provided by Noblesse Interiors. We opted for a white leather  stool to accompany the makeup toilet. 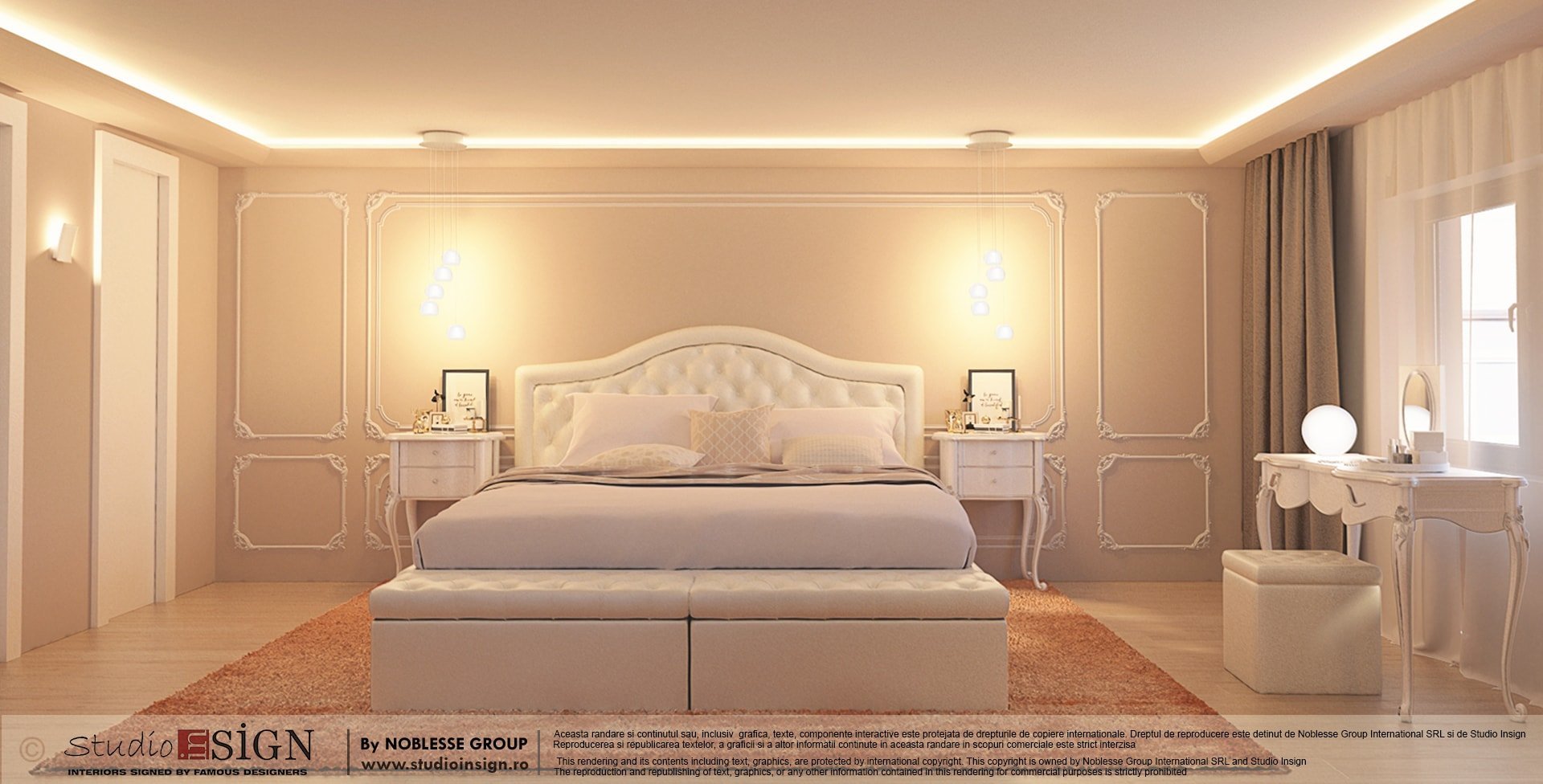 In the guest bedroom we used the same chromatics as the rest of the house. To create a feeling of spatiality, we placed two mirrors that guard the bed and in order to give the space a touch of preciosity, we used wallpaper on the walls. The room is complemented by a multifunctional table, that has the role of a make-up toilet, a minibookcase or a TV composition. As customers are passionate about traveling, we've placed on the walls photos from their travels. 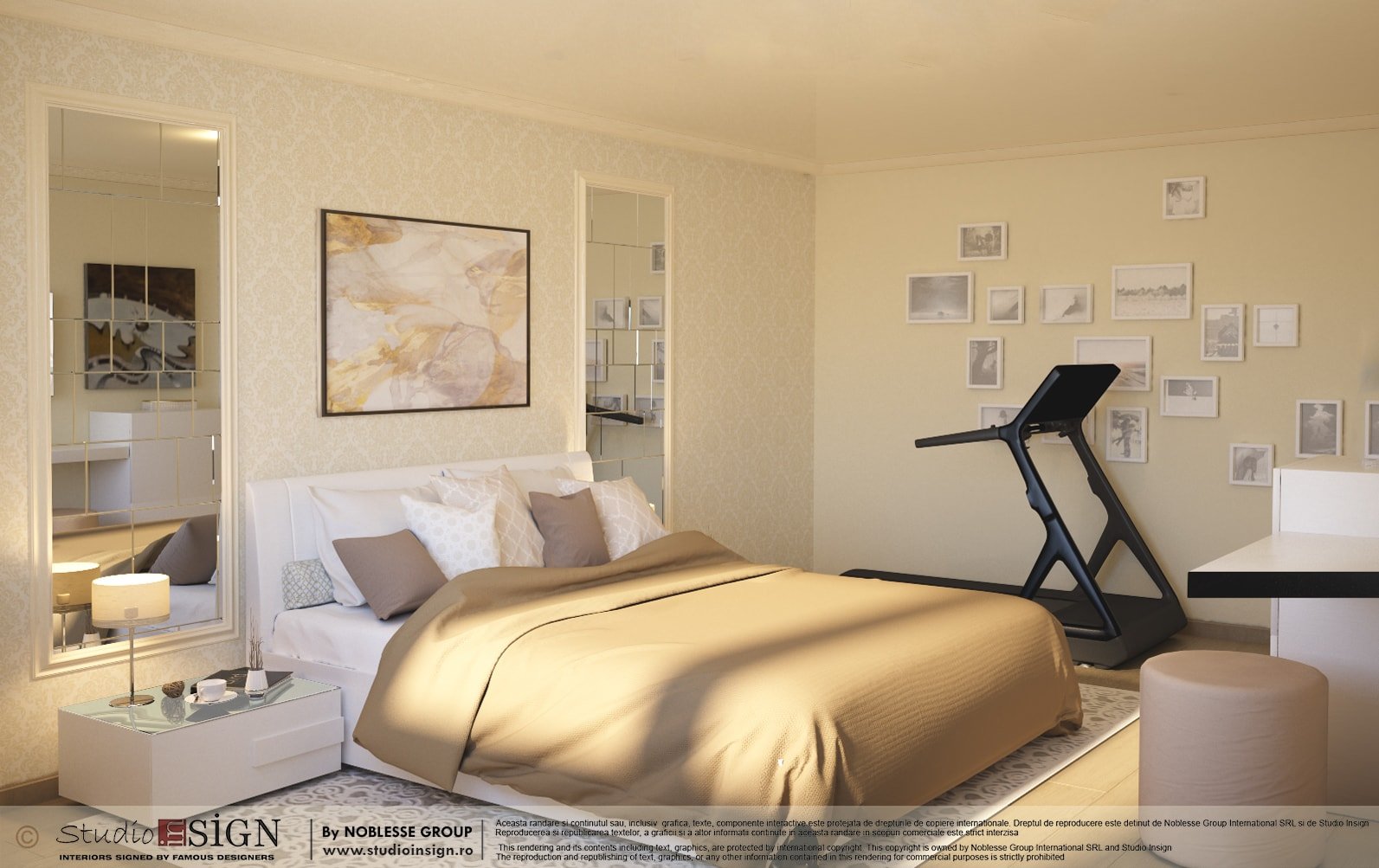 The upstairs lobby, due to its generous space, integrates another office, and in order to recreate the feeling of spatiality, we used light colors. We used sound-absorbing panels on the walls. 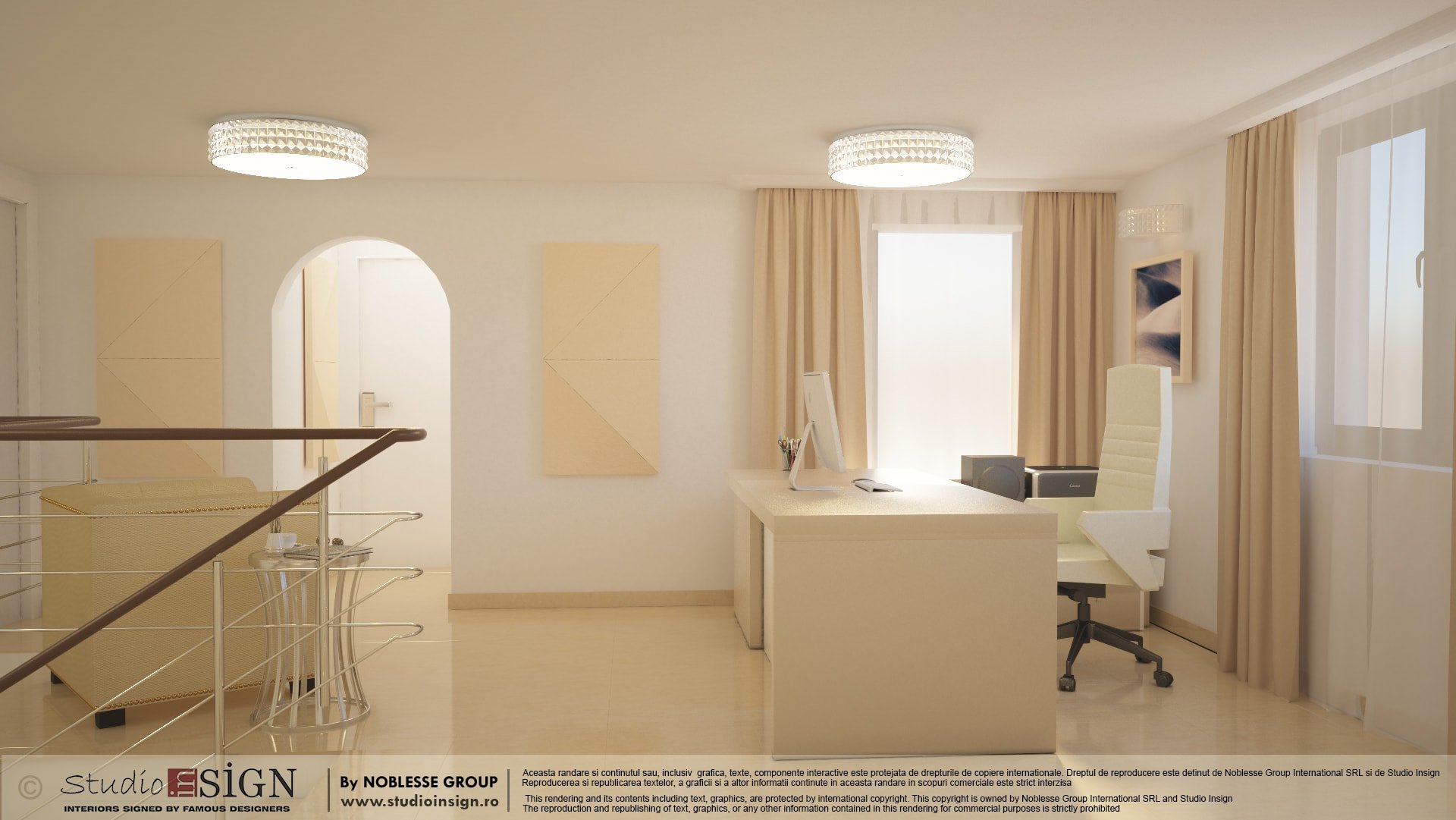 The staircase presents decorative luminaires made by internationally renowned designers and a classical wallpaper model. 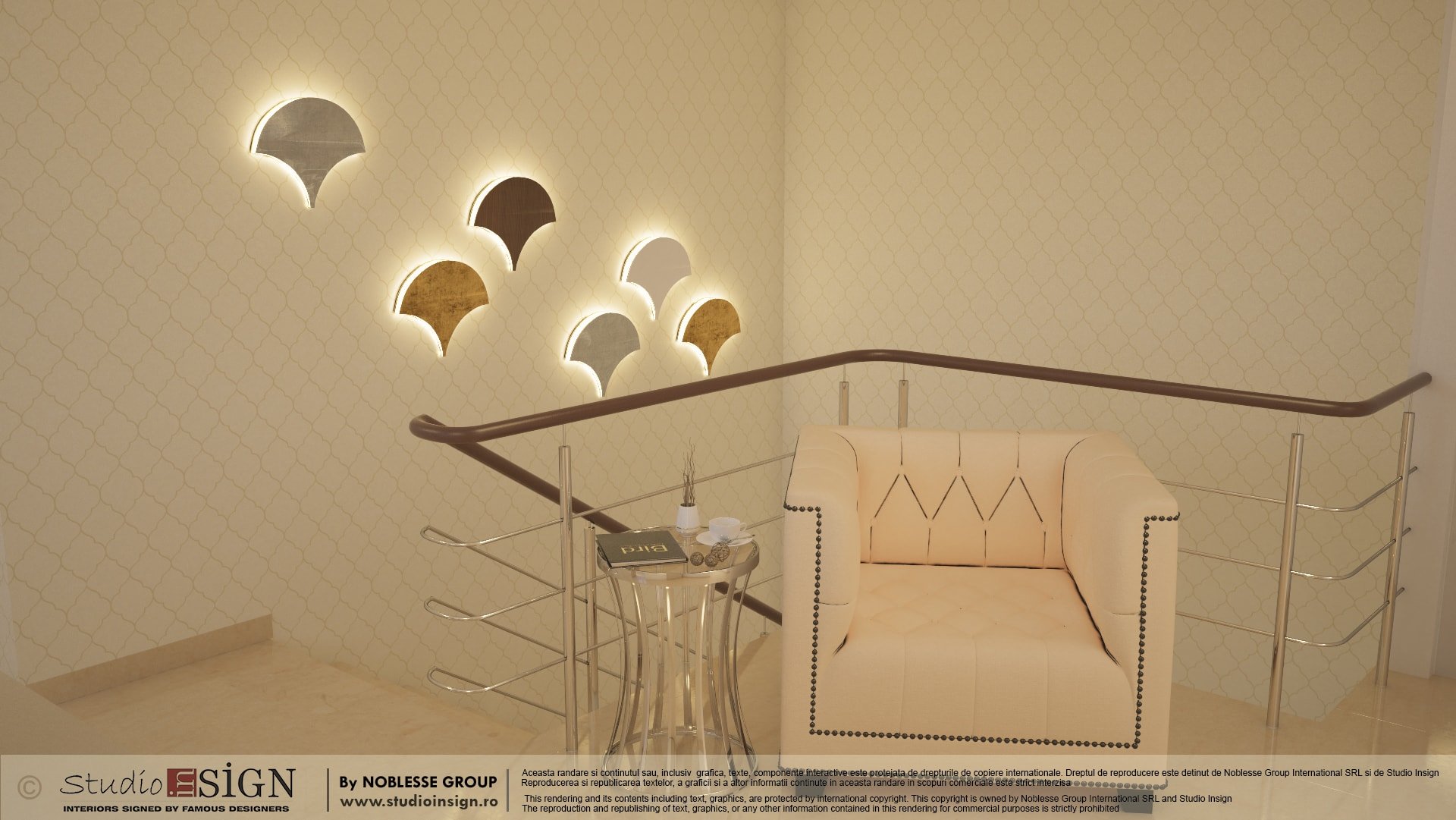 In the upstairs bathroom we chose a classic style, as it is seen in the suspended furniture with double washbasin. We used mobile lighting fixtures to increase their functionality and at the customer's request we used a tub that features interior light. 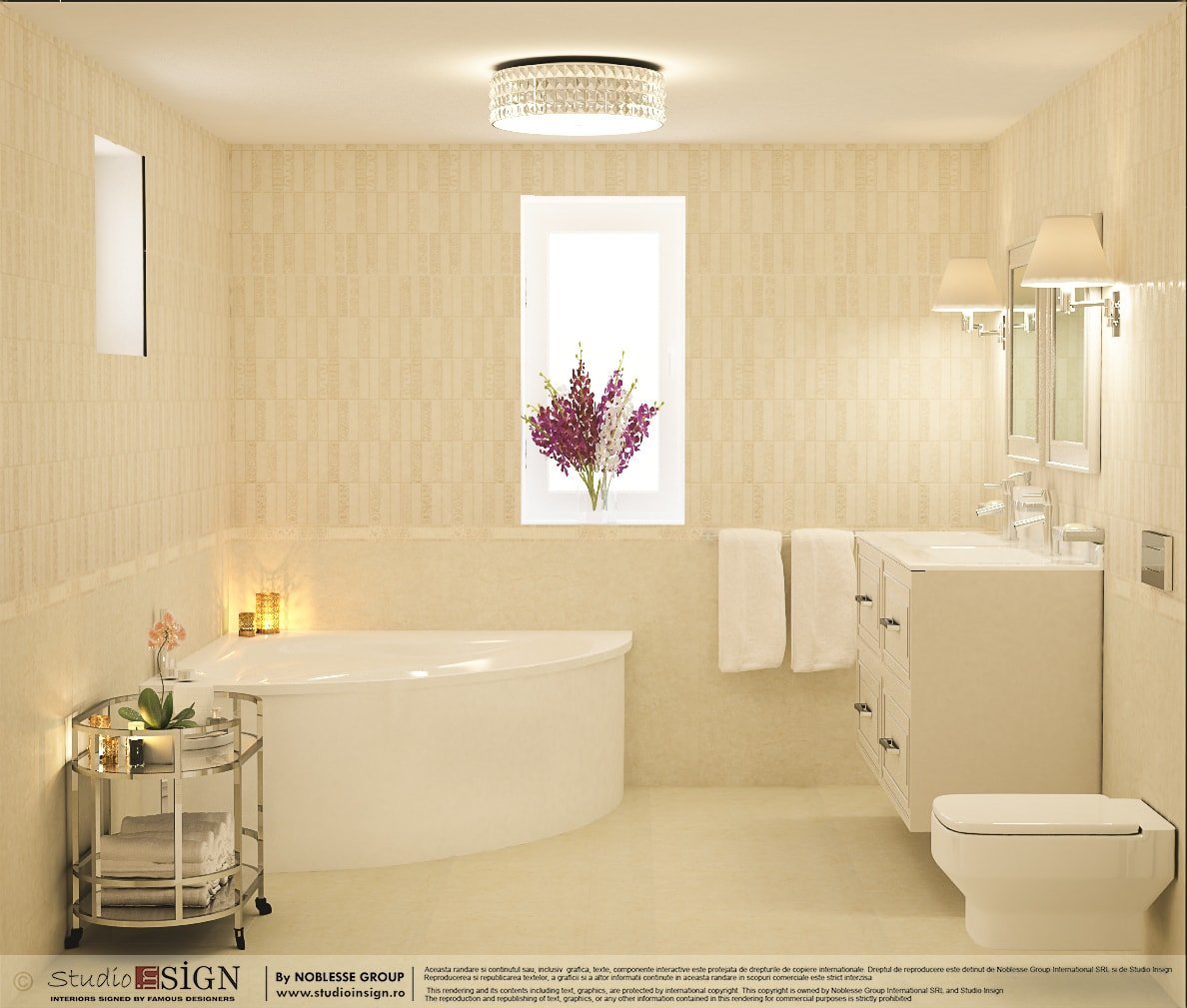 The house also has a small terrace, consisting of a table of 8 people, chairs, a three-seater sofa and a fridge. To give room warmth, we placed some paintings on the walls. 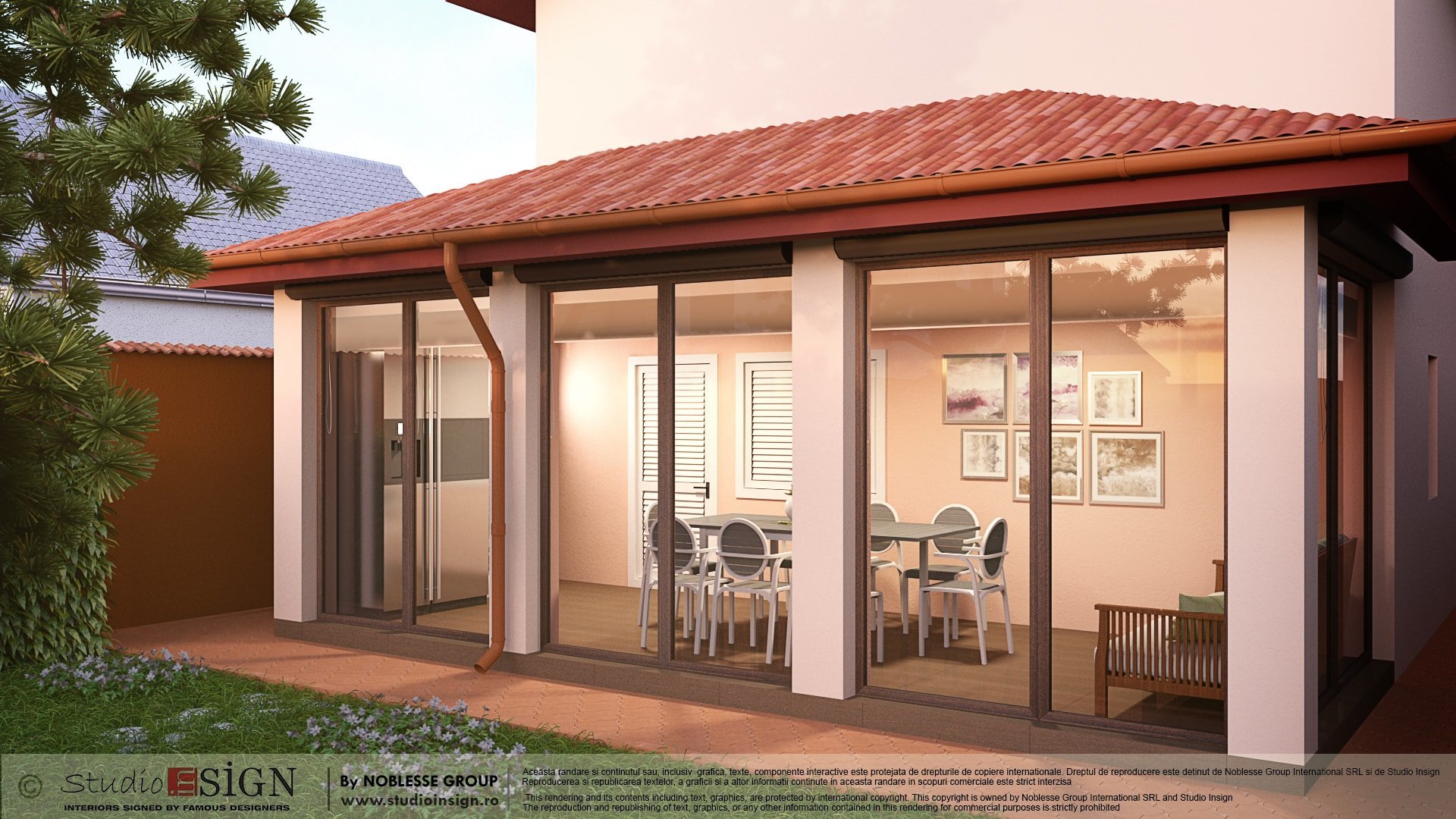 The products used in this interior design house are entirely part of the portfolio of our main collaborators, Noblesse Interiors, interior design and turnkey projects experts.